The man with the sad eyes 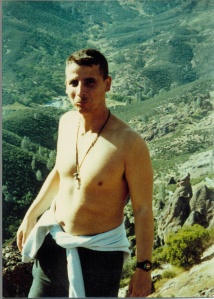 (The book is done. Now to edit. Please assist. Is this tale worthwhile?)

The man with the sad eyes

A book needing to be written.

The man with the sad eyes
Part one
January 2012
It is raining season in Honduras. With the heat and the rain I have been sitting alone in the private bar in a hotel on the coastline of Honduras. I have been roaming from Tela to Trujillo for three months.  I don’t like staying too long in one place. The Natives ask too many questions. They wonder why a gringo would just sit and watch the sea all day and night, waiting for no-one. The hot days were coming. The heat was increasing daily. The activities of the day workers and fishermen I could see becoming more fruitful for them. Tela is my favorite city in Honduras. Always busy and everything you need can be gathered and bought without too much effort.

I have hiding here from many reasons. A man who wasted and abused all things and  left only death and destruction in his wake. He had only death to wait for. Here in the lonely bars no-one know my face. I’m just another tourist chasing the prostitutes and  drinking the good Honduras rum. I speak the Spanish language rarely. Better to look confused and play the part of a real tourist.  I do miss the USA, but I know. If I return north. I will be found. The western wind confuse death and give me the chance to figure out how to trick death. Death is very wise. He expect me to follow the safe path.  I have been roaming Belize, Guatemala and Honduras for one year. The deep tropical forest hide men secrets and past.

This isn’t my first time coming to Central America. There are many people like me. Mercenaries, criminals and people hiding from their past. I could fit into each group. Many men from Europe and Asia are with me. I know killers and greedy men. I don’t rate their life. All of us become dirty with hate and greed. Better to allow God or the Devil to separate the sinner from the good man. I sit alone and drink a beer at the hotel bar. I watched the beautiful young Honduras girls dance and have some fun. I like Honduras. The woman are firm breasted and not afraid of sex. I was raised where sex was dirty and you had to wait till you were marry. Here with the heat. Pretty Honduras girls wear light clothing, not afraid to show their bodies. The Latin music is being played loud and the dance floor is filled with happy and content people. The young woman moving their body slowly and erotically making men have want and need.

I know my time is limited. Death can sense your direction. I know I need to go further west. Death had took all my comrades. I hear his whisper in my sleep. “Coyote, Coyote, I feel your need, your hunger.” I reach for my powerful pouch. I bring out and put the crystal given to me by a Witch in Monterey. She befriended me when she saw the sadness I held. She told me. “Your aura is black. A dark black Johnnie. You have been dead for a long time. She gave me the crystal. She told me. “Keep it with you. Death is afraid of the light. Keep moving and don’t look back. You must become a ghost. I want you to go to Trujillo. They have herb for all sicknesses. Even for dead men walking.”

I bring out my small pipe. I put the devil smoke in the pipe. I light the pipe. I begin to remember my Apache protector. He told me to smoke the devil smoke. Blind the part of the memory you need dead my friend. You have been a excellent warrior for a nation that taught you death. Now the blood is in your skin and in your heart. No forgiveness for men who lived a life for blood. Death may be your mercy.” I went to Trujillo many times. Kind women make the devil smoke for me. A combination of many herbs. I never ask what the mixture is. Better to leave some things to the unknown. I have study herbs for many years. I know the base of the mixture is rosemary. I have studied the old herbal cures for many years. Kept me healthy in body and in mind. I allow the smoke to clean my mind. I sit back in the chair and I’m joined by Rosa.

April 1998
The Spring rain is light and I’m waiting at a bus stop in Tampa, Florida. I have been roaming for three months now.
Not a senseless roaming, but a roaming to find reason and purpose to be alive. I take the bus to the downtown area. I go to the Irish Pub where I left my Dakota truck. It was 10 am in the morning. Few men drink the poison this early. I been trying to quit thinking. My mind kept wandering to people faces and battles I’m trying to forget.
I turn around and a old man is sitting with me. He had a old body and his eyes were filled with fire brown eyes.
He smiled at me and told me. “Life is to be lived, not to look for death. He will come when it is your time.’ I felt a strange heat from the man as he offered me his hand. I took the hand and he introduced himself. “My name is Samuel. One of many names I use.” He ordered a cup of herbal tea and requested my name. I told the man my name is no-one. I need to be alone please.  He told me. “Johnnie, you can’t hide from death. Men like you who swim in shit and dodge the bullet too many times. Caught the attention of the old spirit. Your friends are dead and you holding on to life on the wrong side of the edge. I see in your eyes you remember me from Santa Cruz. I came for your friend and you stopped me. Your friend died anyway. He was doing the bad drug. I watched him swim in his own shit and blood. You changed. Some folks can learn from the LSD.”

I told the man I had to leave. I got in my truck  and I drove west. I decided to go to California. Get away from Florida as far as I could. I didn’t know today.  I had escape death today. He was friendly for some reason? He wanted something I didn’t have yet. I decided to stop in Texas. Spend time with Joseph, my Apache friend. He was a Vietnam vet who pities a 1/2 Ojibwa with no place to go. He taught me how to use the peyote. I would learn later the peyote had turn me into the right direction. Protected me.

← Beautiful Brigitte
A wish upon a star →

12 thoughts on “The man with the sad eyes”