What have we learn? 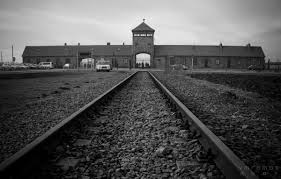 What road are we on?

(The old man spoke with tears.
Told me it must never happen again.
He  told me he watched his brothers and parent walk into death arms.
He could not do anything.)

I was sitting alone at the train station in Stuttgart in 1978.
A old man sat at my table and offered his hand.

I took it and asked what does he want?

He told me. “On this day 33 years ago.
A American soldier broke down  the wall of  the concentration camp.
Picked him off the floor and held him. “

The soldier hand fed him because he was too weak to feed himself.
The soldier took care of him for three months.
He was very weak and never asked the soldier name.

He wanted to thank a American.
By  buying a American  Soldier a  meal today.

He showed me his mark.
A tattoo he held proudly.

Forced numbers put on  men and woman showing they were  Jews.

I told him. “Please sit with me.
I would be honor to eat with him.”

I listen to stories of good times and bad.
Tears came to his old eyes when he told me.
How they separate him from his family at the train station.
He never saw them again.

His family made the mistake of hoping for common sense and sanity.

Most of his family went to Auschwitz.
He never saw them again.

He was lucky being strong and young.
He went to work camps in Germany.

He lived in Switzerland now.
He  learn to appreciate everyday being alive.
He whispered ” I still don’t understand the hate for us from the Germans.”


I said very little.
I had great respect for this man.

He taught me what we can endure to stay alive.

His last words stays with me.

As he shook my hand.


His eyes filled with tears.

He left me sitting alone.
Thinking how hateful and cold this world can be.
Coyote
November 2008

← I couldn’t find you
Fragile love →