Another poem for Memorial day. “Killed and killed”

A true and sad story of the permanent wounds of war.

On Friday night my father drank his rum.

He would come and wake me up late in the night.

I watched him and listen to his war stories.He would start calling out to lost friends.

I would sit and pity him for his great pain.

.He drank every night to try to hide the burden.

He told me. ” I enlisted son, I don’t know why for Korea and stay a second tour.

The blood infested my soul.

I killed and killed.

I watched my friends die.”

He would sit alone and talk to ghost of men left in un-marked graves.

I would carry him to bed.

He would whisper ” they are not coming home.”

My father had no fear.

He was a hard and cold man who loved laughter and woman.

God, those memories drove him crazy.

When he quit drinking he never talks of war.

He told me ‘ no-one cares about his time in the war.

He was another crazy Indian man killing for the USA.

Ain’t no rewards now or then.”

My father held all his Army decoration with great pride.

He was proud to defend his country.

He said ” I know soldiers must fight to keep us free.”

My father died a young man of 61 years old.

The old Soldiers came and gave him a 21 gun salute.

I wonder would he trade the nightmares and the blood on his hands to be clean of a war never won. 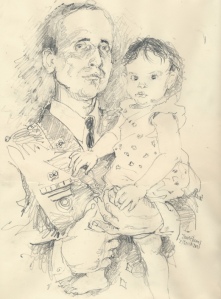 6 thoughts on “Another poem for Memorial day. “Killed and killed””