Share this:
By proclamation of General John A. Logan of the Grand Army of the Republic, the first major Memorial Day observance is held to honor those who died “in defense of their country during the late rebellion.” Known to some as “Decoration Day,” mourners honored the Civil War dead by decorating their graves with flowers. On the first Decoration Day, General James Garfield made a speech at Arlington National Cemetery, after which 5,000 participants helped to decorate the graves of the more than 20,000 Union and Confederate soldiers buried in the cemetery.

The 1868 celebration was inspired by local observances that had taken place in various locations in the three years since the end of the Civil War. In fact, several cities claim to be the birthplace of Memorial Day, including Columbus, Mississippi; Macon, Georgia; Richmond, Virginia; Boalsburg, Pennsylvania; and Carbondale, Illinois. In 1966, the federal government, under the direction of President Lyndon B. Johnson, declared Waterloo, New York, the official birthplace of Memorial Day. They chose Waterloo–which had first celebrated the day on May 5, 1866–because the town had made Memorial Day an annual, community-wide event, during which businesses closed and residents decorated the graves of soldiers with flowers and flags.

By the late 19th century, many communities across the country had begun to celebrate Memorial Day, and after World War I, observers began to honor the dead of all of America’s wars. In 1971, Congress declared Memorial Day a national holiday to be celebrated the last Monday in May. Today, Memorial Day is celebrated at Arlington National Cemetery with a ceremony in which a small American flag is placed on each grave. It is customary for the president or vice president to give a speech honoring the contributions of the dead and to lay a wreath at the Tomb of the Unknown Soldier. More than 5,000 people attend the ceremony annually. Several Southern states continue to set aside a special day for honoring the Confederate dead, which is usually called Confederate Memorial Day.—

Today I will drink  a cold beer and shot of whiskey.  I drink alone to friends lost to war. I learn with living, the sadness my Grandparent held when talking of family members lost in World War one and World War two. I go alone to my friends graves and I tell them. I’m staying strong for you. I still hear your voice telling me. Johnnie, you will be fine. Go forward and remember life is hard. We are harder.

Old Dad would sit alone. Drank his rum and beer. He wanted silence and I could hear him talk to dead friends lost in Korea and the Vietnam war late into the night..He lived his life with no fear of no-one. Only the memories of war could make him know weakness.

Today is Memorial day. One of good friend brother’s gave me a photo. Words on his fence. Strong and true. 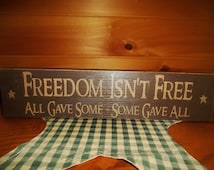