War can catch even the cold in heart.

I was a Soldier for almost 15 years. I volunteered for every dangerous mission you could be part of. The missions were to Africa, Bosnian, Central and South America and Iraq. I had no fear of death. I have seen dead enemy soldiers and the poor innocent civilians in the way of hate and war. I wasn’t effected by war. I was raised in Detroit. I saw my first dead body at four years old.  I watched my uncle died. I was raised with the Vietnam war and body counts were part of my life. My father served in the Korean war and I volunteered for Vietnam at 17-year-old. I learn even the cold in heart can be affected by war. Funny part the shadows of war showed up after I left the military.

I left the service in the year 2000. The Army gave me a hard time on enlistment. I decide better to be with family and take the chance in the civilian sector. I joined the reserved. I went to two meetings. The unit didn’t asked my name or rank. I wrote a letter of resign because I was working two jobs and no time for the B.S. My friend did the same. He left three months before I did. He joined a good unit. He had 23 year between active duty and reserve time. The additional time would be a good bonus for his retirement. He stayed in the National Guard. My friend and I were station for 12 year at Fort Hood, Texas and Fort Steward, Georgia. We raised our kids up together. He was the person I trusted with my family when I was deployed.  He trusted me with his kids also. Soldiers are a close family. If one Soldier had a problem, We would gather our funds to ensure the Soldier would be Okay. We came back from a deployment from Fort Irvin, California. I went home to my wife. My friend showed up and told me his wife and kids were gone and he did not know where. I called the First Sergeant. He told me to go with my friend to insure nothing went wrong. We traveled to Michigan and back to Texas. Took three months for him to track down his wife. I stood with him and try to insure he was okay. He went to court to get his kids back. I traveled back and fro with him to court. In the end, the judge gave the kids to the mother. He got his kids twice a month. I would travel with him to pick up and take back  his two girls. I would buy them treats for my friend had little extra funds.

Every Summer we got together and spend a few days together. We were both from Michigan. He lived about 60 miles from my home. In the Summer of 2004. I didn’t hear from my friend. I called his parent. His mother gave me his address in Iraq. I sent him some western books. He like the cowboys stories. He was a real country boy. He like the country and working hard. In the Spring of 2005. I called his parent. I asked was my friend back from Iraq. This time I got the father. He told me. He is dead. He was killed in Iraq in August 2004. I went silence for a few seconds. I thanks the father and hung the phone up.

I told my wife our friend was killed in Iraq and I went into my bedroom. My wife joined me and we cried for hours. I didn’t believe my old friend was dead. I went into a silence and stayed away from people. Poor family watched me fall apart and get meaner. I went to work and told my boss. My good friend was killed in Iraq. He didn’t care. My family learn about the death of my friend. They tried to pull me out of the depression. There were no words to fix me.

I went into a dark depression. Watching the TV. Checking the names of the Soldiers killed in Iraq. I went to the computer. I researched the names of the dead. I found three more Soldiers I knew. I lost interest in all things. I sat by my computer, pissed off. I wondered if I stayed in. Maybe I could have saved his life? Maybe could have been different?

A year later. Wife told me she called the mother of my friend. We were going to their house and they would take us to the grave of my friend. They invited me to meet the family and wanted to meet me. I drove the sixty miles in silence. I had no idea what was going to happen?

We arrived at the parent house. Three of the brother and sisters were there to meet me.I hugged each of them and thank them for the invite. They told me. They were glad to meet a friend of their brother.  I hug the mother and shook the father hand. He apologizes for the hard way he told me of his son death. I told him. I appreciate the invite. The mother took me to a display. It had my friends picture and all his decorations and metals. I started to cry. The mother came to me and we cried together.  We served 12 years together and the moment at display I realized he was dead.

We sat in the living room. I told them stories of their son. I told them. Their son was my daughter first babysitter. My wife wanted to go out. He volunteers. We dropped my daughter off. She was happy with the two daughters to entertain her. I told my friend. If any problems. Leave the light on. We will pick her up that night. At 2.30 am  we drove by and all the lights were on. My friend was holding my yelling daughter with a smile and happiness we shown up. We were training at Fort Irvin, California. Three young black Soldiers couldn’t put the stake in the hard desert sand. My friend bet he could put the 24 inch stake in with one hit. They took the $5.00 bet. In one swing of the large jack hammer he put the stake 18 inches into the ground. I told them. I miss his smile and him forcing me to watch the rodeo and WWF.

They told me he got marry three years ago. He met a good woman who made him happy. He had a good life at the end. They told me they were glad that their son had a good friend. I told them. He had many good friends. His oldest brother gave me some photos. The photos were of a painted fence. Written on the fence was. “Freedom isn’t free. Some have given all for freedom.”

I follow the parent to the graveyard. It was a small town. They had a place for Soldiers lost to war. The mother walked with me to the grave. The grave had flowers from his daughter and his wife. I went and touched the grave. I begin to cried. The mother came to me and held me like a child. She told me. My son would appreciate you coming today. She left me alone. I made a silence promise to help his daughters.   I looked up and I saw tears in the father’s eyes. 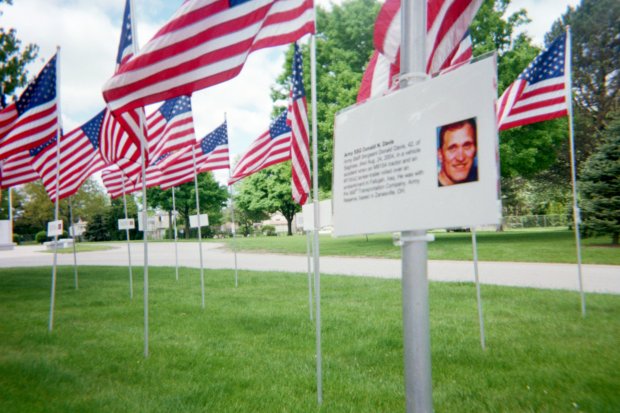 The mother gave me some shells from the 21 gun salute and a DVD of the funeral.  I drive home in silence.  I put the DVD in. My friend was a volunteer fireman. The fireman, Soldiers and whole town were at the funeral at the high school. The whole town came out to say goodbye to a hero. A thousand people cried tears for my friend. His daughter read a poem. Brought the honor guard soldiers to tears.

I accepted losing my good friend that day. I had to say goodbye. I learn when they announce a Soldier death on TV. People are learning sadness and regret. I’m thankful for my friend’s parent and my wise wife. I had to face my friend for the last time and say goodbye.

Today I want to return to my friend grave and thank him for his friendship. I want to bring his favorite beer “Miller”. Sit and drink the beer with him and talk with him alone. Tell him save a seat for me. Us old Soldiers need to sit and talk. I want to hear his laughter and see his smile again.

← Unabashedly unmasked – The bitter truth of Society
“Stone to flesh” →