What is right? What is wrong?

“Adoption of President Trump’s proposed cuts to the FY2017 and FY2018 budgets could lead to tragedy and crisis for millions of vulnerable people across the Horn of Africa and beyond, the global organization Mercy Corps testifies today at a House Foreign Affairs Subcommittee hearing on “East Africa’s Quiet Famine.”

With famine already declared in parts of South Sudan and looming across Nigeria, Yemen and Somalia, 1.4 million children are currently at risk of imminent death, warns Michael Bowers, Mercy Corps’ Vice President for Humanitarian Leadership and Response. In light of this need, the proposed budget cuts are “not only irresponsible, but undercut America’s humanitarian leadership role in the world,” Bowers says in written testimony.”

What is important? and what is not?

Once I thoughts I had no opportunity. President Clinton send my division in the Army to Africa three times in the nineties. We went on a water, food and medicine mission.

We went to Africa to help. I remember our medical people working non-stop to save life. I saw great sadness in their eyes. Doctors and nurses trying to save lives. I took food to villages and I cooked for them.  They saw us as saviors and heros. Not soldiers.

We  broke down years of hate and separation. Us soldiers cries often. We had to bury children, women and men.  A death from starvation. Cannot be described in words.

I remember the doctors and nurses. So damn tire and they would never rest. Their eyes filled with sadness. They lost more people than they could save. I held nurses crying and I told them.  We must what we can. This is all we can do.

My unit in one day. We find and bury 500 bodies. Mostly children. We worked in silence and we didn’t understand how the world allow starvation to kill.

Today a cold-hearten Pesident want to cancel the 2 billion for the Africa.  We spend with the military pension. 1.2 trillion on the military.  He wants to add 60 billion more to the Military budget. 25% of our Tax Dollars goes toward the active wars.   I work and I pay a lot of taxes. I do not mind my dollars going to save lives.

What is wrong? and what is right?

Dear child.  How can I tell you?

Poor child. You did choose this place.

You did not decide this life.

What is wrong? and what is right?

Right is giving with a open heart.

Right is the willingness  to help the people in need.

I saw a child with a smile and I watched the child die.

I belive every life had value.

The worst sin is spending 1.2 trillion on war and forgetting the child. 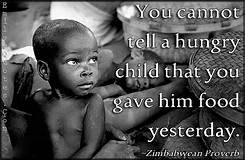 “The conflict-fueled hunger crises in Nigeria, Somalia and South Sudan have culminated in a trio of potential famines hitting almost simultaneously. Nearly 16 million people in the three countries are at risk of dying within months.”

“The United States traditionally has been the largest donor to the U.N. and gives more foreign aid to Africa than any other continent. In 2016 it gave more than $2 billion to the U.N.’s World Food Program, or almost a quarter of its total budget. That is expected to be reduced under Trump’s proposed budget, according to former and current U.S. government officials.”