Part of old version and a modern version. Be careful what you wish for. Everything cost some something. 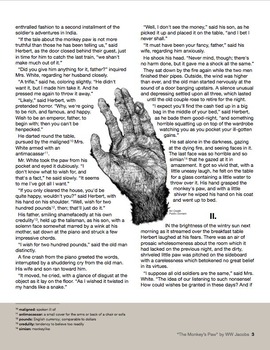 (Sometimes, we have enough. When you wish upon a Devil’s tool. Payment is due.)

Pretty young women with three children, struggling to make end-meets. Tonight she would go to the food bank. Her oldest son Billy asked. Please mama, get some ice cream for us. She smiled and she told him, I will try honey. Maybe we will be lucky. Little Ana hugging five year old Peter. She asked her mother. Can we buy Halloween costumes for school? She fake a smile and she told her daughter. We will try my baby girl. It was October 14 and the money was gone for the month of October. She hugged her three children and she watched them play near the TV. She laughed at her children watching a Halloween tale. She disliked her three bedroom trailer, they had enough to eat and the children were content. She wanted more for her children.

Her car was breaking down and the future seem hopeless. She hated she had to call her Grandfather to fix the car and to repair the porch. He told her on the phone. Baby girl. I am a old man and all I have is you and the children. I work part-time still so I can help you. You cook for me, clean my messy house and take me to CVS to buy my medicine. You gave me three beautiful grandchildren. If you need anything. Please ask. She loved her grandfather. He always made her feel she was special. Tonight she was tire.

She left the house when the grandfather came. He hugged her and he told her. Tonight me and the children. Halloween costume shopping. She smiled and she told him. You don’t have to. He kissed her forehead and he told her. Yes I do. I am the grandpa. She drove to 7-11 and she bought a coffee and a older man adding sugar to his coffee watched her. He told her. Please young lady, allow me to buy you a coffee. You look like you are having a bad day. She looked him over and he looked safe. She told him, thank you and I appreciate. They walked to the pay counter together and he told her.  We believe we are struggling and we don’t have enough. No perfect life and sometimes we have everything we need. seeking perfection can lead us to hard misery.

She gave a half smile and she told him, thank you for the coffee. I don’t know sir, life can be a bear sometimes. He handed her a small decorated box and he told her. A item of interest. If you open the box, you own the box. It will give you three wishes and you must pass on. Remember every wish will demand payment. The wishes will give and they will take. She held the small box and she laughed. She told him. Wishes are meaningless and she walked away holding the box tightly.

He watched her walk away and he saw the sadness in his face. He felt the heavy curse leave his life. She went to her car and the engine light was on. She opened the small box and in the box. A hairy animal paw was in the box. Was a few words written inside the wall of the box. If you use the Monkey’s paw. Be careful, all wishes will cost something. You can make three wishes and pass on. She laughed caressing the monkey’s paw. She told the six pm sun. I want money, enough money to pay all the bills and fix the car. Enough money to make the children happy.

She put the monkey’s paw in the box and she put in the glove compartment of the car. At the food bank, she took what she needed. She was surprised. They had ice cream. Her son favorite ice cream, Superman. She took the ice creams and the other items to the counter. A pleasant lady said hello and she counted the items. The lady told her goodbye and she walked slowly to her car. She got home and her grandfather came to her and he helped her carry the bags in. He told her. The kids loved their costumes and I love you baby girl. She watched him leave and she told the night. Thank you for my grandfather. I love the crazy Irish man.

At 2 am, the phone rang and her daughter Ana answered the phone. Grandpa’s sister told Ana. Please get your mother. Ana went to her and she look scared. Something bad had happen to grandpa, I know. Amanda answered the phone and the sister Liz told her. Paul, he was hit and run accident by someone. He is in the hospital on nineteen mile.  She drove to the hospital and when she arrived. Liz met her and she told her. He is gone Amanda. His last words. “Please sister, I want a Irish grave. 12 feet deep, so grave robber won’t steal my soul. And Irish whiskey at my send-off.”

Seven days later at the grandfather funeral. Liz came to her and she hugged her. Paul left you everything. His Will and final documents stated. “Amanda was the only one who stood with me in the good and the bad days. She made me eat and she gave me reasons to live. Three beautiful grandchildren made me smile everyday. She was my blessing and my sweet girl. She will get everything I have. I want a Irish going away party. Remembering me, as I was.”

She went to the bathroom and she cries alone. She went home and her, the children. They held silence in a circle on the floor. The boys told her. Who will take Grandpa place? Seven days later, a check for $250,000 came by Federal express from a insurance company. She held the damn check and tears fell from her face. She watched her children play and she knew. The damn wish did this.  She went to the car and she found the box and she caressed the small box. She opened the box and her slender fingers caressed the monkey’s paw. She told the monkey’s paw. He was my salvation, he ensured I always had enough and he loved my children and me. She told the 4pm sun. I wish my grandfather was alive. I miss him so.

On Devil’s night at 3 am. The phone rang. Amanda went to the phone and she answered. A heavy voice told her. Amanda, please come and get me. It is dark. She hung the phone up and she was shaking. The phone rang again. The voice heavy and hollow told her. Please Amanda, I need to come home. I miss you and the children. Damn Irish grave, keeping me be. She told the voice. Grandfather. You are gone and I miss you so. He told her in a dark tone. Come and get me Amanda. I am waiting for you.

She hung the phone up and the phone rang again. She went to the car. She opened the box and she held the monkey’s paw. She told the night. Please dear grandfather. Please rest and I am so sorry. She went back into the house. The phone was silence.

She went to her grandfather’s grave with the three children. They brought some wild flowers and the children sang to the quiet grave. She knew he was in heaven and he was waiting for her. They went to the 7-11. The children bought sweets and drinks. She bought a coffee and she saw a man looking sad as hell. She went to him and she told him. Can I buy you a cup a coffee. You look like you are having a hard day. He was unshaven and looking rough. He turn to her and he told her. Thank you, I would appreciate the coffee. He told him. Could be worst. He told her. I doubt it honey. At the cash register. She handed him the box with the monkey’s paw. She told him. You can make three wishes, but be careful what you wish for. He laughed and he took the box. Amanda and the children ran to the car. Amanda felt a heavy burden gone.